On a cool and rainy night here in New York City I write this blog post to share with all the goings-on of my musical world over the last two months.  There is much to catch up on, so without further ado:

I will begin by sharing the lovely news that my quartet and I won the gold medal at the 2017 Osaka International Chamber Music Competition, a triennial affair that brings ensembles from across the globe together on one stage in southern Japan.  As I didn’t grow up in the world of musical competitions or contests, this was a relatively new experience for me, and what a wild ride it was.  We performed four complete programs of quartets by Mozart, Janacek, Berg, Schumann, Akira Nishimura, Paul Wiancko, and Beethoven in their entireties.  Following the fourth and final round, we were elated to be named the winner and closed the tour with two concerts in Osaka and Tokyo.  The staff, logistics, hospitality and organization could not have been more perfect — everything down to our chair and stand height was thought of and taken care of with kindness and ninja-like precision. The contest aside, for me the most moving and important element of our travels to Japan was the fact that we were able to perform for Ayane’s parents, Mr. and Mrs. Kozasa, who heard us live for the very first time.

I’ll rewind to where we left off after my last post, which was just before I embarked on a 3-week tour of New York, France, and Germany with The Knights.  Kicking things off with two concerts in Brooklyn, the band then flew across the pond for chamber music and chamber orchestra performances at festivals in Aix-en-Provence (where the lavender is most famous), Friedrichshafen, Heidelberg, and Hamburg.  From the Schnittke two-violin duo to a Stravinsky quartet to the Reich double violin concerto to the symphonies of Haydn and Mozart, it was a rich and jam-packed trip!

Perhaps the most glorious moment for me was playing the Reich double concerto (with my long-time partner-in-crime Guillaume Pirard) in Heidelberg’s Kongresshaus Stadthalle — one of the most beautiful acoustics I’ve ever had the pleasure of experiencing.  The breathtaking views of Lake Constance in Friedrichshafen, crisp blue skies filled with the fragrance of lavender in Aix, and delicious cheeses in Heidelberg made added sprinkles of joy and beauty throughout the trip.

I returned to Cornell directly from Germany to hit the ground running with rehearsals for the U.S. presentation of my CCA Biennial project from last year’s work in Italy, Le storie di vita nel legno.  The evening featured the performance of two new trios by Can Bilir, the exhibition of the refugee-created mural — which had been shipped from Italy and rebuilt at Cornell — and the premiere of our documentary that we made on the project itself last year in Brescia.  Despite an epic computer disaster that I experienced while on the road in France, I managed to refinish the final edits of the documentary just in time for the debut!  It was so powerful to bring this project full circle; I remain indebted to and inspired by the men of Cooperative Selene with whom I worked to build cultural bridges through the arts during my time in Italy last year.

The very next day brought my annual faculty recital, this year with Italian pianist Pietro Bonfilio.  We presented a program of Steve Heitzeg, Janacek, Kabalevsky and Brahms in the Carriage House Hayloft (my favorite spot to play in Ithaca!) and had a chance to begin plans for our upcoming recital in Tuscany this summer.  How small but fulfilling a world it felt bringing my life and work in Italy back to Cornell.

The moment these projects finished it was time for the end-of-year push with student recitals, grades, and committee meetings.  My fabulous students presented a showcase recital featuring works from Bach to Sinding and Tchaikovsky to Gershwin.  As my students walked off stage, the three other Aizuri ladies arrived in Ithaca, and we began the journey to Japan with rehearsals around my teaching schedule and late-night run-throughs for friends…

I hopped off the plane from Tokyo to greet a group of dear family friends who had arrived in Ithaca to attend their son’s graduation, and we spent the rest of the weekend in commencement mode.  I joined my student, Sarah McDonald for a performance of some Bartok duos at the Department of Music ceremony and stood proudly in the faculty lineup to witness the procession of the Class of 2017 along the Arts Quad of Cornell.  Vice President Joe Biden delivered the 2017 Convocation address and it was, in my opinion, totally fantastic.  He referenced his own college years when the country seemed even more divided and in crisis amidst the Vietnam war, the assassinations of Martin Luther King, Jr. and Robert Kennedy.  He warned against fear and encouraged the young graduates to seek action and tolerance.  It was a brilliant combination of topical realism, uplifting optimism, and guiding advice for the future.

And as many know, Mr. Biden loves ice cream, and as Cornell Dairy is famous for its house-made churns, he couldn’t leave campus without the University creating and naming a new flavor after him: “Red, White and Biden.”

I sign off tonight dreaming of the music that I’ll be preparing to perform over the next two days as part of Yellow Barn’s MusicHaul No Boundaries tour, where we YB alums set out to perform concerts in the back of a converted moving truck that parks and sets-up a temporary stage on the streets of New York!

And as always, a photo diary here: 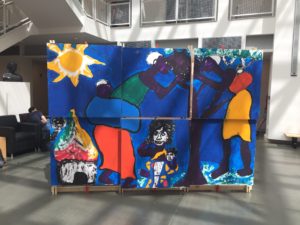 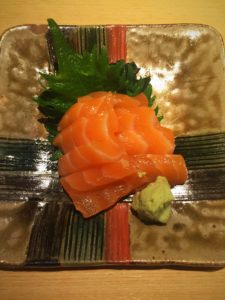 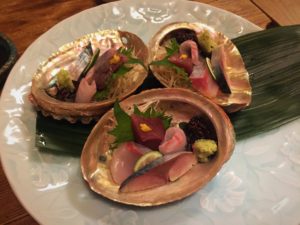 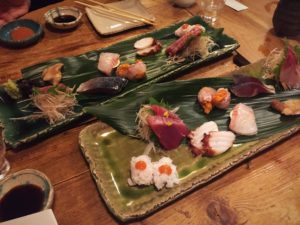 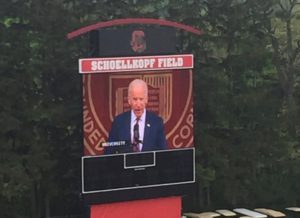