Last Tuesday we bid farewell to a musical giant. Maestro Stanislaw “Bear” Skrowaczewski was a man, whom for me, represented everything that is sacred, dutiful, and thoughtful about the art of music making.

Not only did he serve 19 years as Music Director of the Minnesota Orchestra and helped to catapult the ensemble to one of the best in the nation, but was a brilliant composer and arranger. He became a mentor and granddad figure for me and my family, someone we could look to for so many of life’s answers. Bear was the definition of integrity, both musical and otherwise, and his spirit will live on for generations to come through his memory and music.

The very last piece that Maestro Stan composed (completed in September 2015) happened to be a duo written for me and my brother, Daniel, to honor my father’s 70th birthday. Daniel and I were honored to present this piece alongside his quintet “For Krystyna” (the piece he wrote to honor his wife at her funeral) at a beautiful memorial service held at Minnesota Orchestra Hall. There were beautiful words spoken by those close to him – among them his biographer Fred Harris – and the service was bookended by Bach’s Air and Bruckner’s Adagio (Maestro Stan had a particular gift and affinity for Bruckner; his recordings of Bruckner symphonies are arguably the most revered in the world) performed by the entire Minnesota Orchestra. It was a true celebration of a life lived to its fullest in every sense. Closing remarks by his two sons, Nicholas and Paul brought the event to a close, signaling only the beginning of his legacy.

Rest In Peace, Bear, We Love You!

Click here to read the Minneapolis Star Tribune article and see the slide show of photos from the event.

The past two months were a whirlwind of wonderment in my musical life! February began with our annual Chamber Music Society of Minnesota Family Concert – a “choose-your-own-adventure” trip down bluegrass lane that brought kindergarteners up on stage to conduct, leading our every move from tempo to dynamics — was followed by Saint-Saens’ iconic “Carnival of the Animals.”  On that concert I also presented the word premiere of Steve Heitzeg’s “Lake Stone Moon,” an incredible piece for solo violin (plus Lake Superior Stone, Boundary Waters driftwood, and Tibetan singing bowl!), which pays tribute to the resistance movement against fracking in the North Woods.  From Minneapolis I headed south to Raleigh-Durham where the quartet dove into an intense but invigorating residency.  Concerts at North Carolina State University and Cat’s Cradle were coupled with master classes at Duke University and the North Carolina Chamber Music Institute and finished off with a trip to a famous Raleigh mainstay, Nana Taco!

From North Carolina the gals and I hopped on a quick Delta flight up to Washington D.C. for our Kenned Center debut!  We presented a program on the Fortas Chamber Music Series of Beethoven, Webern, Caroline Shaw and Mendelssohn; although the acoustics of their studio space while the Terrace Theatre is being renovated are less-than-ideal for string quartet playing, it was a deeply moving experience.  I then headed back to Ithaca to immerse myself in the teaching of my fantastic students at Cornell and then welcomed the Aizuris to campus for our first University residency.  The premiere of Stephen Dankner’s 19th quartet was paired with Mozart and Beethoven, and via residency events, we workshopped our concert repertoire with students and gave a chamber music master class on campus.  It was such a thrill to bring my two musical lives together under one “roof” up in Ithaca.

A quick trip to Flushing for a performance on Marcy Rosen’s Chamber Music Live series at Queens College was followed by a performance at Rutgers University-Camden and a master class with the Philadelphia Chamber Music Society at Temple University brought the calendar to mid-March.  I then headed back up to Ithaca for a beautiful, long stretch of time that included one of the most intense blizzards I’ve ever witnessed (and that’s including my first 17 years in Minnesota!) – Cornell closed for the first time in 24 years – and the 27 inches of snow that fell in my backyard couldn’t go without photos…

After I finally dug myself out of my driveway, the week finished with two recitals, one at Red Newt Winery (a gorgeous finger lakes vineyard that has recently begun hosting a Sunday recital series) and another at Ithaca College on their guest artist recital series.  Susan Waterbury, my twin over at IC arranged the events and then hosted a master class that I gave for her students the following day.  It was a blast to work with such talented, eager and dedicated young violinists.  That week finished with a deeply fulfilling and proud moment for me when I heard my senior music major, Sarah McDonald, give an inspiring and captivating Honors Recital; a few hours later I was on a flight to Memphis where I hooked back up with the quartet for a residency in partnership with the University of Memphis and the Iris Orchestra.  The highlight of our experience there was working on the Mendelssohn Octet with three young musicians who are the current Iris Fellows – their talent and dedication combined with their openness and curiosity made for a rich, uplifting experience.

The next morning at 5am I was headed back to the Memphis airport to hop a flight to Minneapolis for Bear’s memorial.  I had the chance to catch a rare Monday in St. Paul to witness the world’s greatest Suzuki teacher (my mom!) in action with her Pre-Twinkle group class – I nearly died from cuteness overload.  As Spring Break began at Cornell on Saturday, I hopped down to the City for the start of a quartet project and was able to enjoy a lovely dinner with the magnificent Scott and Jane MacDonald, old friends and colleagues from upstate!

That brings us full circle! 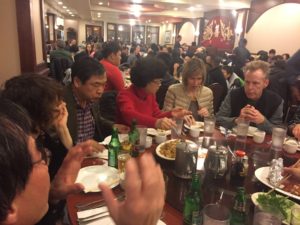 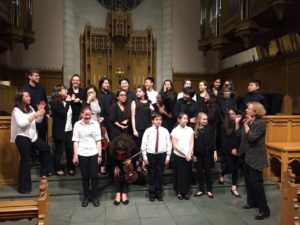 One thought on “Farewell, Bear!”